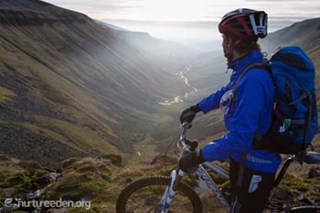 Riding a bike over rolling terrain on quiet rural roads and bridleway tracks is an exhilarating way to enjoy Eden's epic scenery. The Eden Valley and Orton Fells, spread as they are between the tougher terrain of the Lake District and North Pennines, are especially good for circular rides from places like Penrith, Appleby and Kirkby Stephen market towns, which are all accessible by train too. Higher altitude Alston offers adventurous outings for the more experienced cyclist.

The Lakes and Dales Loop allows you to get up close to Cumbria's spectacular landscapes. Using quiet 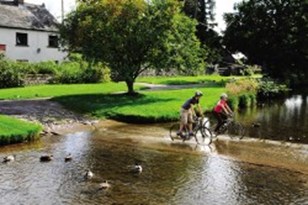 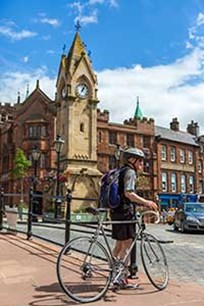 routes which pass through Eden, the Sea to Sea (C2C), Walney to Wear and Whitby (W2W) and Pennine Cycleway, you will be following the blue signs of these challenging National Cycle Network routes and maybe sharing a few words with those who are touring along them. Plenty of Land's End - John O'Groats cyclists pass through Eden as well.

We also have some great downloadable Eden Cycle Routes for Appleby and Kirkby Stephen, Alston and the North Pennines, Ullswater and Penrith.

Overnight or for longer, the Eden area offers a great range of places to stay for cyclists. Establishments in our 'Cyclist Friendly' accommodation section display the 'Cyclist Friendly' symbol to say they are Cyclist Friendly, or have obtained 'Cyclists Welcome' accreditation to provide extra facilities and services confirmed by inspection.

Just make your choice from the list below to find out more about Cycling in Eden: