The natural beauty of Eden has helped to inspire a wealth of delightful church architecture spanning a thousand years.  This section 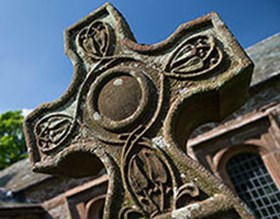 suggests three Church Trails which take in some of the most fascinating aspects of the regions Christian heritage.  At the same time, they guide you through scenic countryside and picturesque villages revealing the true character of this unspoiled corner of Cumbria.

Eden's Christian traditions are evident not just in its church buildings.  Long before the first church was established, early believers defied the widespread paganism of the times and regularly congregated around wooden and (later) stone crosses for worship.

The Eden village of Crosby Ravensworth probably recalls this practice in its name and here the original shaft of a cross can be seen.  It dates back to the 7th Century when St Paulinus preached on the site.

Yet Eden's Christian roots predate even these preachers, for a 3rd and 4th Century ring inscribed with a Chi Rho sign (the first two letters for the name Christ) was found in the riverbed at Brough. This demonstrated a public faith under the new Roman Emperor, Constantine.

In Brougham Castle, a discarded Roman tombstone is used as part of a wall; inscribed PLVS MINUS.  It probably indicates Christian indifference to the traditional Roman fascination with ages and dates.

We've three suggested trails, all of which start from Penrith.

Pick up the Eden Church Trail leaflet from Penrith TIC.