Ullswater Way is a stunning 20 mile walking route around Ullswater.  The route can be walked in either direction and from any starting point. Why not walk the route in shorter sections, using an open top bus or 'Steamer' to start your journey!

Following the fantastic success of the 'Ullswater Way' footpath around the shores of Lake Ullswater, there is also an official

The Loop is well signposted and an illustrated account of the walk can also be found in the Official Guide to the Ullswater Way.  The guide is available from businesses around the Ullswater Way, with £1 for every copy sold donated to the National Park to help maintain the route.  It is also on sale at Penrith Tourist Information Centre.

Another 'loop' to explore is The Lowther Castle Loop, a circular 7.5 mile route which sets off from Lowther Castle and follows the banks of the Lowther river, through the hamlet of Helton and then up to Askham Fell with its panoramic views.  It returns through the charming village of Askham.

More information on the Dalemain Loop and Lowther Castle Loop is available on the Ullswater website. 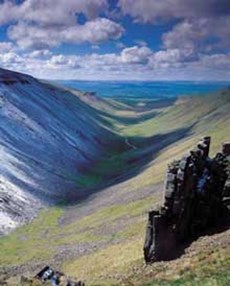 Devised by the late Alfred Wainwright in 1973, this demanding route runs for 190miles (304km) between St Bees and Robin Hood's Bay. It links Irish and North Seas via high tops in the Lake District, Yorkshire Dales and North York Moors National Parks. In Eden, the route runs from Patterdale to the western shore of Haweswater and then through Shap, Orton and Kirkby Stephen. For more information visit The Wainwright Society website.

The Coast to Coast featured in a series with Tony Robinson in March 2017 on Channel 5. 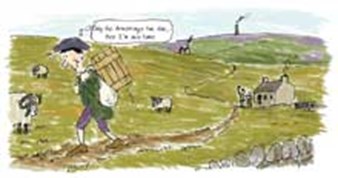 B that links Alston with Allendale in Northumberland. The trail follows in the footsteps of Isaac Holden, an itinerant tea seller and local philanthropist of the 1800's. The countryside is one of stunning landscapes of river valleys and heather moors.  Reminders from Isaac's times and even further back are never far away. The full route can be undertaken over a long weekend or more comfortably doing shorter sections and taking longer.  Isaac's Tea Trail has been described by The Guardian as "England's last great wilderness trek."

This classic long distance route runs for 100miles (161km) from Skipton to Penrith, passing through some stunning scenery on its journey. Starting from Skipton Castle, the walk passes through the Yorkshire Dales on its way into the Upper Eden Valley and through Kirkby Stephen and Appleby before finishing in Brougham, Penrith.

The Pennine Way celebrated its 50th Anniversary in April 2015 and a special four part BBC1 series 'The Pennine Way' was broadcast throughout April. 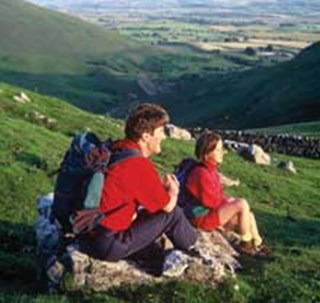 Although an old route, now out of print The Alternative Pennine Way is a rather lower level route than the Pennine Way, which passes through attractive villages and points of interest. The Way descends from the high fells to reach the River Tees then crosses the fells to High Cup, Great Dunfell and Cross Fell.  It then descends to Alston to reach the Northumberland National Park and Hadrian's Wall.

The South Tyne Trail is a 22¾ mile (36.5km) route set in the North Pennine Hills. The route flows with the river, from the source downstream to Haltwhistle. The source to Alston is approximately 9½ miles (15.5km). From here you can discover a rocky limestone plain. Once you arrive in Alston you start the journey to Haltwhistle approximately 13 miles (21km) at the South Tyne Railway. The trail runs adjacent to the railway track. This route is suitable for pushchairs and wheelchairs on most of the route between Alston and Haltwhistle.

'The High Cup Walk' featured on the ITV1 series 'Best Walks with a View with Julia Bradbury'. Starting in Dufton, near Appleby, it's 8.9 miles (14.41 km) and takes in some stunning views along the way.

Although now classed as an 'old route' the Cumberland Way is an 80mile (129km) walk takes in the historic county of Cumberland and the Lake District National Park. The route begins in Ravenglass, heading through Nether Wasdale and Keswick.  It then follows the old coach 'road' around the foothills of the Helvellyn range to Aira Force waterfall in Ullswater. The Cumberland Way then follows a path around Gowbarrow Fell - with magnificent views over Ullswater to enjoy.  It continues on to the village of Dacre, before heading to Eamont Bridge, Penrith. 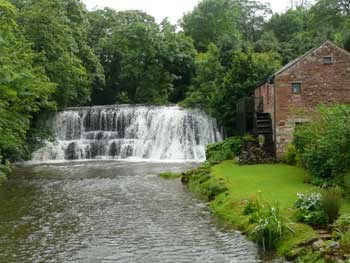 The walk starts in the World Heritage village of Saltaire.  It d goes north through the Yorkshire Dales before crossing the Howgill Fells in a dramatic ridge walk. After Newbiggin-on-Lune the route reaches the isolated waters of Sunbiggin Tarn, a Site of Special Scientific Interest.  It then crosses Great Asby Scar, the finest area of limestone pavement in the UK outside Ingleborough. The Eden valley continues to surprise and delight as The Dales High Way passes the picturesque Rutter Mill and its stunning waterfall.  It finishes with a riverside ramble into Appleby where walkers can catch the train to return on England's most beautiful railway line - the Settle to Carlisle.

The Eden Way is a 78 mile (126km) route follows the River Eden from the Solway Firth through quiet countryside to the source on Mallerstang Edge, south of Kirkby Stephen. The route visits Carlisle, Wetheral, Armathwaite, Kirkoswald, Langwathby, Appleby, Warcop and Kirkby Stephen before finishing on Black Fell moss on the Mallerstang Edge.

The Howgills and Limestone Trail is a 76 mile long-distance walk from Kirkby Stephen to Settle takes you through picturesque and, in parts, demanding area of Cumbria and North Yorkshire - with a short diversion into Lancashire.

It draws its inspiration from Alfred Wainwright's Walks in Limestone Country and Walks in the Howgill Fells. The route has strong associations with railways. It passes over the spectacular Smardale Gill viaduct, and close to the Stainmore Railway, the disused Ingleton and Tebay Railway, and the Settle to Carlisle railway. Visit the Pennine Journey website for more details.

The Miller's Way is a 51mile walk between Kendal and Carlisle which runs through Eden.  It was created by Carr's Breadmaker to commemorate the company's 175th anniversary.  The route is based on the original journey made by Quaker Miller Jonathan Dodgson Carr.  He founded the Carr's flour, bread and biscuit dynasty in Carlisle on June 29 1831 after leaving his home town of Kendal.

This is a long-distance footpath of 247miles (398 km), of which 53miles are within Eden, including parts of the Eden Valley and Pennines. The footpath is based upon a circular walk which Alfred Wainwright undertook in 1938, setting off from Settle to Hadrian's Wall and back. The following year he wrote about his 'Pennine Journey' which was published in 1986. More information is available on the Pennine Journey website. 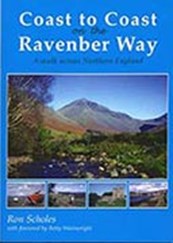 The Ravenber Way passes through two National Parks and other areas of outstanding natural beauty.  This is a long distance walk of 210 miles (336.8km).

The walk commences at Ravenglass.  It passes Lakeland's finest array of high peaks, climbs over the high Pennines, traverses the northern moors and Cheviot Hills and ends at Berwick-upon-Tweed.

The route starts in Appleby (county town of Westmorland) and then travels west and generally southwards, winding its way through some glorious Lake District scenery.  It passes Ullswater, Grasmere and Windermere, before visiting the market town of Kendal. From there it follows the canal and tracks through woodlands and meadows to Arnside, on the shores of Morecambe Bay.

The Yorkshire Dales Centurion Walk is 100miles (161km) and described as an adventure walk around the Dales and Howgills and may be split into short or long distances. No route description is available, just a set of grid references and the names of the places to visit en route. The framework is one of five stages, each with a starting point, with the choice left to the individual walker of what to visit and what to avoid. Route options include ascents of the 'Yorkshire Three Peaks' (Whernside, Ingleborough and Pen-y-ghent) - along with the Coum, the Calf, Nine Standards Rigg, Tan Hill, Buckden Pike, Great Whernside and Plover Hill.

The Yoredale Way is a 101mile (163km) walk starting in York and finishing in Kirkby Stephen. Between these two points the walker will pass through Yorkshire, before achieving their objective amongst the grandeur of the Pennines. Along the route are many interesting towns and villages to explore.