Get Outside in the Westmorland Dales

A 20 minute film 'Get Outside in the Westmorland Dales' was launched in October 2021. 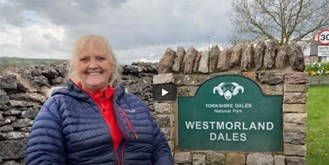 Join Debbie North as she explores the area lies to the north of the Howgill Fells in Cumbria, extending over 200 sq km from Maulds Meaburn in the north to Tebay in the south-west and Ravenstonedale in the south-east.

You can read more on the film launch by visiting Debbie North's website.

railway line which once ran from Tebay to Darlington.  The northern end of the nature reserve includes the steep wooded slopes of the gill carved by Scandal Beck.  South of Smardale Gill Viaduct the character of the nature reserve changes and you find yourself in open rolling countryside typical of the area.

The complete circular walk, known as the Viaduct Round, starts at the centre of Kirkby Stephen and incorporates local footpaths, totalling about four miles. The portion along the old railway over the viaducts is easily accessible to walkers, cyclists and horse riders. With graded level surface it allows good access for visitors of all levels of mobility.

The route begins at the car park in Nateby, a few miles from Kirkby Stephen.  It follows the permissive path along the disused railway line, now owned and managed by the Northern Viaduct Trust.  The path is fairly flat and suitable for all types of wheelchair.

An Access for all Walk leaflet has been produced by the Rotary Club of Penrith. The route has been chosen to make the walk accessible to all, including those with disabilities.  It takes about 1½ hours to complete the full tour, but there is ample scope to tailor the route to suite individual preferences.

The Lake District National Park have created a series of walks around The Lake District - Miles without Stiles.  These are suitable for people with limited mobility.  This includes a route starting from Pooley Bridge, one around Brotherswater and the recently updated Threlkeld to Keswick Railway Trail.

The Skelton to Unthank Footpath

The Skelton to Unthank footpath is 1 mile long with a 1.5 mile post at the end of the all terrain path before the large field. The path to Unthank continues straight across the field.  Aim for the large tree and the field gate on the other side.

Skelton village can be accessed of the B5305 from Junction 41 off the M6. Parking is available at the Village Hall car park on the right as you enter the village. For access to the path, follow the sign to the Church. Access to the path at Unthank is best done from the Upfront Gallery where parking is available.  A short walk takes you to the sign post at Nelson Square.