Richard III (1452 - 1485) was King of England from 1483 until his death in 1485 at the Battle of Bosworth Field. He was the last king of the House of York and the last of the Plantagenet dynasty. His defeat at Bosworth Field, the last decisive battle of the Wars of the Roses, marked the end of

the Middle Ages in England.

The coverage of the discovery of the remains of Richard III in a Leicester car park and reburial in Leicester brought the former King to the World's attention.

However, did you know that Penrith can boast its own connections to Richard III and that he lived at Penrith Castle for a time?  Penrith even has its own branch of the Richard III Society. 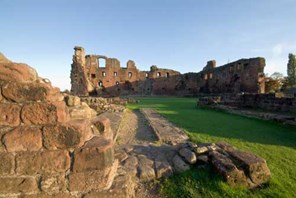 It is thought the original house was built at the end of the 14th century and modified in the 15th century.  This was when Richard III turned the former house into a Castle with a banqueting hall, kitchens, porter's lodge and brewery.  Richard Duke of Gloucester, the future Richard III, was granted the manor of Penrith.  It's believed Richard often stayed at the Castle (for periods between 1471 and 1485 as he held the position of Sheriff of Cumberland).  His role was to secure the county against the Scots and keep rival local families under control.

He seems to have been popular within the local community.  It is said that four hundred Penrith men marched from the town to his Coronation in 1483.

In the south aisle of St. Andrew's Church is a modern window called the Neville Window.  It was created to show off two fragments of medieval glass traditionally said to represent the heads of Richard Plantagenet and Cecily Neville - Richard III's parents.  (However, some research, suggests that the portraits could be of Richard's grandparents Joan Beaufort and Ralph Neville of Raby Castle who were granted the town of Penrith in 1396.)

In the northwest corner is the last of 8 water spouts which once adorned the tower proclaiming by the symbol of a bear and ragged staff that they had been placed there by the Neville family, to which Richard II gave the town and manor of Penrith in 1397.

The bear and ragged staff emblem belonged to Richard Neville, the 16th Earl of Warwick (cousin of Richard III) and popularly known as 'Warwick the Kingmaker.'

After his father died, Richard III was placed under the protection of Richard Neville, Earl of Warwick and spent various times at Middleham Castle in Yorkshire. He married Richard's daughter, Anne on 12th July 1472. Their only son, Edward of Middleham, died in 1484 aged 10.

In the north aisle of the church, more old fragments of glass have been set into a window depicting the crowned and sceptred head of a king. The tradition is that this head is of Richard III.

Although, there is no proof Richard III ever stayed here, it is traditionally thought that while building works were being undertaken at Penrith Castle, Richard lived here in what was one of the most important houses in Penrith and formerly Dockray Hall.  One room is named 'The Gloucester Room' and is where Richard is reported to have stayed.  There are stories about a secret tunnel, running from Penrith Castle to the pub.

In the bar, there is panelling of different periods.  Behind the bar there is a screen of an early date and the plant design carving is thought to be the "Planta genista," the emblem of the Plantagenet Kings.

Across the road from Penrith TIC, is the Royal British Legion building.  This used to be Musgrave Hall and the family Coat of Arms can still be seen.  A member of the Musgrave family - William Musgrave - died at the Battle of Bosworth fighting for Richard according to 'The Ballad of Bosworth Field' (earliest surviving copy mid-17th century.)

Penrith Tourist Information Centre has a Richard III Penrith Trail leaflet for those wanting to find out more about his connections to Penrith.  The leaflet includes a special Richard III Trail around the town.