Orton to celebrate its 200th Farmers’ Market in September

Saturday 8 September 2018 will see the 200th Farmers' Market in Orton, Cumbria.  It was established early in 2001 and is one of 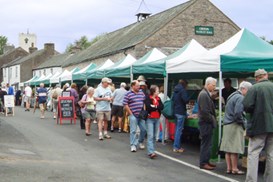 A couple of the original directors and stallholders are still involved including David Knipe, Jane Emerson and Dianne Halliday and there are lots of newer faces too.  The 200th Farmers' Market will feature music, cake and a few surprise guests as well as having the bell ringing, coffee morning and second hand books that visitors expect in All Saints' Church.

The Market in Orton has been a great example of the development, growth and success of artisan food and drink producers in Cumbria during the past 17 years.  Leanne Duerden has been Market Coordinator at Orton Farmers' Market since June 2006 and she was a food producer selling Mellow Meadow soups and cooking sauces at Orton before that: "The 200th Market is a great excuse to celebrate and we're hoping to have a few of our past businesses and supporters taking part as a one off.  We know that a lot of our regular visitors will be pleased to see them and to catch up on what happened to their businesses and what they're doing now."

Since the first Farmers' Markets in Orton, the availability of local food and drink has grown tremendously.  The Cranston's Food Halls have opened up, the Farm Shops and Butchery at Westmorland Services have developed and there are now various Taste food festivals and other food events across Cumbria.  There is also now better distribution to local shops in the villages, including Orton Village Store which stocks bread from Keswick, traditional puddings from near Penrith and cheeses from across Cumbria as well as local cakes, milk and cream.

"It's much easier to find locally grown and made produce now," says Stewart Lambert of Kitridding Farm, one of the original stallholders, "and there are farms like ours that have developed their own farm shops too. But there's still a place for a regular traditional Farmers' Market.  Orton, so close to the M6 and also so much of a village community, is an ideal location as it draws customers from a wide area and feels like a day out in the country. I look forward to seeing my regular customers there as well as keeping in touch with other producers and good friends."

The 200th Farmers' Market will also be a time to look back and remember some of the characters who contributed to creating Orton's reputation as a great "foodie day out" in its early days.

"A few of our early producers are no longer alive," says Leanne, "and many regular customers will remember them and appreciate what they did - people like Sue Forrester of Cream of Cumbria, Bob Kitching of Leagram's and Ian Mullins of Rachael's Kitchen Granola.  We're hoping to celebrate their part in our past as well as bringing together as many producers as we can, past and present, to celebrate on 8 September."

Full details of the Orton Farmers' Markets for 2018 are online at www.ortonfarmers.co.uk