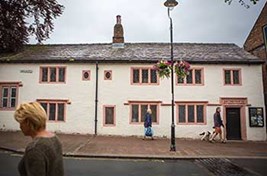 , has a long and interesting history dating back to the year 1670. The building celebrates its 350th anniversary this year.  The school was named after William Robinson, a native of Penrith, who moved to London.  He became a wealthy merchant, Freeman of the Grocer Company, and substantial property owner.

Despite his position as a man of considerable standing in the capital he maintained his contacts with Penrith. In his will dated August 6, 1661 he left a benefaction of £55 to be paid annually by the Grocers' Company to the town of Penrith out of the income of his London properties. Some of the money was to be used by the Penrith Charities to help the poor.  But the sum of £20 per annum, for ever, was to go to the Church-wardens of the parish of Penrith: ... for the educating and bringing up of poor gerles (in a Free School) to Read and Seamstry Worke or such other Learning fitt for that sex being the poorer sort whose parents are not able to pay for their Learning.

It is assumed that the school opened in 1670, the date seen in the inscription above the doorway.  Although the building itself may date from the earlier years of that century. Nothing definite is known about the school until 1700 when the Register 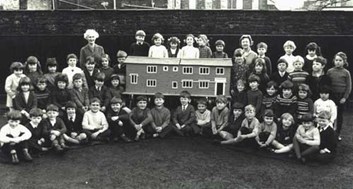 Book was first written, the school rules were set down, and a list made of 29 girl pupils.

The rules required that the dame or mistress should be of "grave, modest and matron-like behaviour" and "well skilled in teaching young girls to read, work lace, knit and other matters proper for young girls to learn and practice". School began at 7 in the morning between Michaelmas and Shrovetide, and at 6 in the morning the rest of the year. The children who were very poor wore a badge 'PS' (Poor Scholar) and they were allowed to go about the town at certain times to ask for charity until they were able to work. The regulations also say that the children had to 'refrain from swearing, lying, stealing, and quarelling', upon pain of being severely punished by the mistress.  If any broke the school windows, "the offender to repair them."  A separate Spinning and Knitting School was also established in the upper room of the school. The room was removed after the 1870 Education Act when the building was re-modelled in order to make it more suitable for an Infants School. In 1894 the Education Department condemned the school, complaining that there was no room for marching! This resulted in further improvements being carried out, including the addition of a classroom and cloakroom.  The last headmistress of the school was Miss Kathleen Shaul, who had joined the school as a teacher in 1939.  Normally the school had about 60 pupils, but during the war years the figure was increased by evacuees from the north-east.

There was heavy emphasis on the three R's - Reading, Writing, and Arithmetic.  But the school's original role in encouraging pupils to learn the rudiments of needlework and similar skills also featured in their classes.

Though in December 1967 it had been announced that Robinson's Church of England Infant School in Middlegate was scheduled for closure.  In 1970 it celebrated its 300th anniversary with a service in St. Andrew's Church, Penrith. Pupils marched in procession to St. Andrew's led by the headmistress and the Vicar, Canon Stewart. Carried at the head of the procession was a special banner bearing the Latin inscription above the school doorway. The School closed on April 1, 1971, the children moving to a new school on the Scaws Estate, now the Beaconside School. Pupils staged a surprise presentation to their two teachers, Miss Shaul and her assistant Mrs. Miller.

In 1978 Penrith Civic Society, with the help of a Job Creation Programme, created a leisure area from the former school yard.  This opened up a view of Thacka Beck which flows behind the building. The area was officially opened on May 13, 1978 by Miss Shaul, the School's last Headmistress. During the years following its closure, plans were made for the old building to take on a new role as a museum and information centre.

The collections from the old Penrith Museum which had been housed in the Town Hall prior to the old museum's closure in the 1960's, were moved into Robinson's School.  Between the early 70's and 1980's a small exhibition with display of museum artefacts was set up in the 'museum-cum-tourism information bureau'. Then in February 1985 Councillor R. I. Porter, Chairman of the Museum Sub-Committee, outlined at an open meeting in the Town Hall proposals for the formal re-establishment of the Museum.

An inaugural meeting of the Friends of Penrith Museum was held on 5 March and on 9 July 1985 the Penrith Museum was officially re-opened to the public in Robinson's School. In 1988 Eden District Council resolved to undertake a scheme of major alterations and extensions to the building.  Bby 1990 it had been completely renovated with additional office space and storage accommodation for the Museum. A grant from the Museums and Galleries Commission enabled the building of an environmentally controlled store.  Further grants for the scheme being received from the North West Museums Service, English Heritage, Northern Arts and Cumbria County Council. It was officially opened by the actor and playwright Colin Welland on 20 April 1990.

In January 1991 the Museum was awarded Full Registered Status by the Museums and Galleries Commission. 2010 saw further alterations to improve disabled access. Additional gallery space was provided at ground level by relocating the store room to upper floor level, using one of the two upper galleries for the purpose. Benefitting from these provisions over the years the educational objective of Robinson's philanthropy has continued in the building which he endowed. Children still learn within its walls through activities and workshops especially arranged for local schools and family groups.