Celebration of quidditch in Appleby

A free celebration of quidditch is to take place in Appleby. 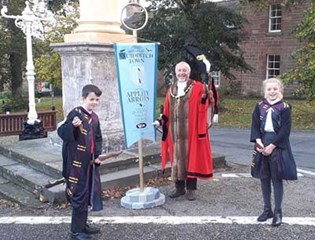 Cumbria’s Honorary Quidditch Town is set to sprinkle magic over half-term with a free Magical Quidditch Treasure Hunt around the historic market town, inspired by ‘Quidditch Through the Ages’.

Appleby is celebrating its first anniversary of becoming an Honorary Quidditch Town by announcing the free magical event for locals and visitors.

The Eden market town has become a popular destination for followers of the boy wizard.  Fans can have their photographs taken next to the Appleby Arrows Quidditch banner.  The banner was presented to the town by Bloomsbury Children’s Books, the publishers of the Harry Potter series.

To entertain the many young visitors and locals, Appleby Town Council in collaboration with Bloomsbury Children’s Books and businesses in the town centre are hosting the week-long Magical Treasure Hunt inspired by ‘Quidditch Through the Ages’ starting on October 23.

Bloomsbury Children’s Book is donating five copies of J.K. Rowling’s ‘Quidditch Through the Ages’  by Quidditch expert K. Whisp book – which features the Appleby Arrows team – and five sets of Quidditch team patches as prizes for the winners of the Magical Treasure Hunt competition.

Mayor of Appleby Gareth Hayes said: “We are very proud of our Honorary Quidditch Town status and grateful to Bloomsbury Children’s Books for providing the prizes for our Magical Treasure Hunt inspired by ‘Quidditch Through the Ages’.

“The Appleby Arrows are one of the teams featured in the ‘Quidditch Through the Ages’ book by J.K. Rowling.  The book is an essential companion to the Harry Potter series and guide on the wizard’s favourite sport.

“So many people have visited Appleby in the past 12 months since we received the Honorary Quidditch Town status.  We wanted to provide some additional free magic to those who are here over the autumn half-term – especially as it ends on Halloween!

“We welcome treasure hunters to dress up as their favourite wizarding characters – whatever their age!

“I am looking forward to picking the five winning entries out of the sorting hat on Halloween at 4pm at the town’s Cloisters.”

Visitors will be able to pick up their treasure hunt entry pack from the Tourist Information Centre, or any of the businesses taking part. This will include a map of Appleby highlighting where the magical quidditch themed clues are hidden in specific locations around the town and entry form. When completed, entry forms are returned to the Tourist Information Centre in the Cloisters.  All entrants will receive a free Appleby Arrows Activity Pack, provided by Bloomsbury Children’s Books.

All entries will be entered into a sorting hat for the prize draw to win a ‘Quidditch Through the Ages’ book and Quidditch patches at 4pm on Halloween, October 31 at The Cloisters.