Stage 2 of the race this year was all within Cumbria, starting at Carlisle and finishing in Kendal. In Eden the race passed through Armathwaite, 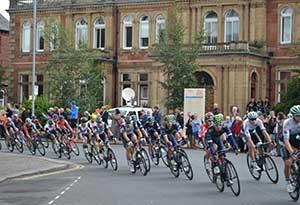 Kirkoswald, Lazonby, Penrith, Eamont Bridge, Pooley Bridge, then alongside Ullswater up to Greystoke past Matterdale End. It then continued to Millhouse before leaving Eden on its way to Cockermouth. Later in the stage, the route touched the Eden boundary again near the Kirkstone Pass Inn after having climbed The Struggle before dropping down to Windermere.

The 2015 ToB was hugely popular in Eden with 50,000 people attending the Cumbrian Stage (which was almost entirely within Eden) and lining the route to cheer on the cyclists which included Sir Bradley Wiggins.

Stage 2 of the Tour of Britain in Eden

On Monday 5 September, the riders and teams' support staff assembled on English Street, Carlisle for an 11am start.

Riders then cycled through Armathwaite, Kirkoswald and Lazonby before arriving in Penrith town centre. They then followed the A6 to Eamont Bridge and took the B5320 to arrive at the temporary bridge at Pooley Bridge just after midday.

After riding alongside the western shore of Ullswater, they headed north through Greystoke, followed by the first of three Sprints at Hesket Newmarket 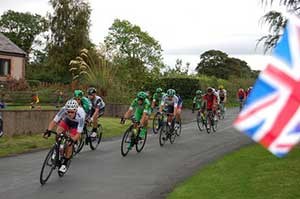 Riders then continued west along the B5291, towards Bassenthwaite Lake.

Teams and riders competing in the Tour of Britain

Watch as the Tour of Britain races through Penrith

TV Coverage for the Tour of Britain

Live coverage of the ToB was available on the Bike Channel UK (available on Sky channel 464, Virgin Media channel 552. and Freesat channel 251.)