Marmalade Triumphs - Despite lockdowns, new regulations and winter storms, thousands of marmalade jars pour in from around the world

In spite of a difficult year, marmalade makers have proven their resilience. Entrants have posted 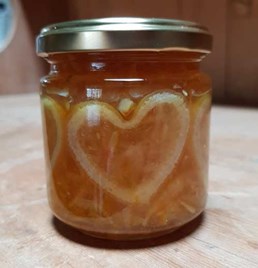 thousands of jars to Dalemain ready for the 2021 Marmalade Awards. Marmalades have arrived from around the globe - Japan, Australia, Canada and the Czech Republic are now all regular entrants, but this year’s competition has also seen arrivals from Kuwait, Honduras, Brazil and Zambia.

Marmalade making is a very personal thing, and this has been especially evident this year. Entrants have included messages and notes, and one Japanese marmalade maker even sent a jar with heart-shaped peel inside, and the wish that ‘marmalade will connect everyone’s hearts.’ Organisers have also been delighted to unwrap marmalade with knitted woolly hats, hand drawn labels and even, in one case, its own horse and carriage!

More time spent in the kitchen has also allowed entrants to be to be especially inventive, with homemade marmalade makers adding all kinds of new ingredients. Knotweed, gorse flowers, rowan berries and star anise have all been added to the citrus preserve, in the hope of standing out from the competition.

The Rathbones First Timers category has seen staff from their Kendal office don chef hats and get slicing with their families, hopefully sparking lifelong marmalade making obsessions! This category has been hugely popular this year, following a quiet winter of being ‘locked down’. One such entry comes from a teenager who spent January making marmalade to his gran’s recipe, instead of going on his planned gap year.

The judging has been delayed until it is safe to recommence, and organisers hope to announce the award winners on 20th June at Dalemain, as part of their annual Plant Fair. The winning marmalade recipe will be replicated by award-winning producers Thursday Cottage and sold at Dalemain and Fortnum and Mason’s, in their famous Piccadilly store.

Awards founder Jane Hasell-McCosh says: ‘We just weren’t sure how the Awards would go this year, and we have been blown away by our entrants, who have sent jars from all over the world. It really does mean so much to them, and to us. We cannot wait to get back to the judging, and find our winner!’

The Awards take place with the generous support of Fortnum and Mason, Rathbones, Armstrong Watson, Thursday Cottage and Lycetts.

To find out more about the Awards, visit www.marmaladeawards.com