An ambassador for one of the world’s most influential travel guides ‘Lonely Planet’, has highlighted The Lake District, Cumbria as one of her favourite 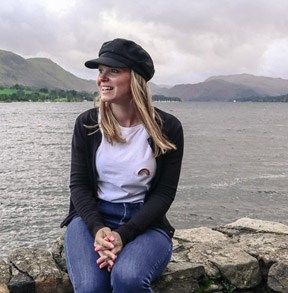 places to visit without using a car, thanks to a successful partnership with Cumbria Tourism.

As part of the official destination management organisation’s ongoing efforts to reduce the number of cars on the county’s roads, it formed a partnership with successful blogger Chloe Gunning; known to her online community as ‘Wanderlust Chloe’, who enjoys a combined online audience of almost a quarter of a million people.

Working with transport providers, accommodation and attractions in the northern Lake District, Cumbria Tourism welcomed Chloe and her partner; also a successful travel blogger in his own right, for a four-day visit to the Ullswater area designed specifically to dispel the myths that a car is a much-needed transportation method.

Arriving on the West Coast Main Line by train and getting around the area exclusively by bus, boat, e-bike and on foot, Chloe showcased the area in a special video highlighting the visit, published across both Chloe and Cumbria Tourism’s own channels.

The partnership with Chloe is just one part of Cumbria Tourism’s ongoing campaign to encourage more visitors to leave the car at home and choose more sustainable transport methods.

Chloe, who likes to avoid driving whenever possible, says, “Social media plays a very influential role in destination marketing. Videos in particular, have the power to transport the viewer to a destination they may never have considered visiting before. Whether it's showcasing the highlights of a region or sharing an important message such as the car-free angle for this visit, it's easier to connect with people around the world than it's ever been before. I loved exploring more of the Lake District on my recent trip, and it was great to experience so much across a few days without needing to get behind the wheel."

Head of Marketing & Partnerships at Cumbria Tourism, Rachel Tyson, says, “As social media becomes an increasingly important way to promote businesses, products and services, it has also become a primary resource for people considering where to take their next holiday. We strongly feel that part of a relaxing break comes by getting away from the car and using other ways of moving around, which Chloe illustrated perfectly. We’re absolutely thrilled with the success of Chloe’s blog and video; and it’s a really strong indicator of how people are choosing to research locations for their next getaway.

“Tourism is absolutely vital for Cumbria’s economy and younger people in particular are becoming increasingly conscious of living a more sustainable lifestyle, not only for their personal wellbeing, but for the heath of their children and many more generations to come. It was a pleasure working with Chloe and look forward to welcoming her again in the future”.

Chloe’s blog attracts around 185,000 views per month, with 430,000 views of her video content on YouTube. In addition, Chloe also enjoys a social media following of nearly 50,000 people.

You can see Chloe’s video on her Facebook page and find all of Chloe’s social media links via her blog.