Beavers are once again in Cumbria, following the release of a male and female into an enclosure on a 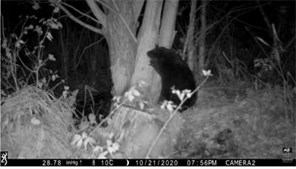 Cumbria Beaver Group has announced that two adult beavers, a male and female, have been released into a 27 acre enclosure at Lowther Estate near Penrith, for a five-year scientific trial. The aim is to obtain data on the impact of beavers in an upland environment, in particular on a stream in a farmed landscape.

The female, named Dragonfly, was trapped and relocated from the River Tay catchment in Scotland, under licence from NatureScot, the public body responsible for Scotland's natural heritage. She was then held at Five Sisters Zoo in West Lothian, for health screening.

The male, named Glen, was rescued from the outflow of a hydroelectric plant in Perthshire by the Scottish Society for Prevention of Cruelty to Animals (SSPCA). It’s thought that Glen became trapped while moving between areas, trying to establish his own territory. The SSPCA carried out health screening on Glen, before releasing him a week later at Lowther.

You can see footage of one of the Cumbria beavers, caught on camera on YouTube.

Please note: There will be no public access to the beavers at Lowther Estate but Cumbria Beaver Group will be posting regular news and updates about the beavers online and on social media.

Find out more about beavers or ask questions about the project by contacting the Cumbria Beaver Group on via their Twitter account @CumbriaBeavers or by email info@cumbriabeavers.org.uk

The permissive path over the top of the iconic Sma…