Landscape and Heritage of Orton and Tebay

Shaped by glaciers during the ice ages; the sandstone geology of the rounded Howgill Fells above Tebay make a striking contrast to the intriguing 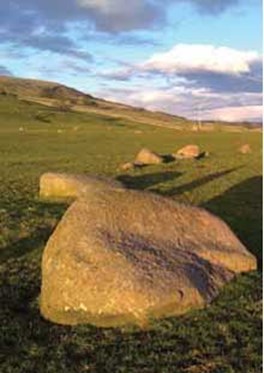 limestone pavements of Orton Scar. The contrasting landscapes of the area are truly a hidden gem. Nestled between the Lake District and Yorkshire Dales National Parks, Tebay and Orton provide a location within easy access to both, whilst avoiding the traffic and crowds associated with bustling tourist centres. Settled since prehistory and shaped by the traditional commons grazing, the landscapes of Orton and Tebay are to be treasured.

Some of the landscapes you may wish to explore are the Limestone pavements on Orton Scar, the magnificent Howgill Fells above Tebay and the secrets of hidden valleys such as Borrowdale: "The most beautiful valley in Westmorland outside the Lake District." A Wainwright.

As the River Lune winds down the valley from its source near Ravenstonedale it passes landmarks such as Andy Goldsworthy's pinfold near Raisbeck, Gamelands Stone Circle, Castle Howe motte and bailey and many picturesque local dry stone walls and buildings. As it heads south through the Lune gorge to the south of Tebay, look out for the heart wood. It is the origin of many myths and legends and a place to make a wish as you pass, perhaps for a speedy return? 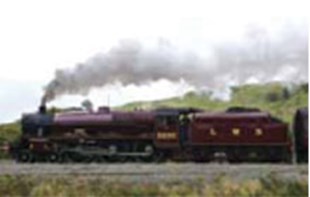 The picturesque Lune Gorge forges a natural north/south pass through the striking Cumbrian mountains. Local archaeologists have found traces of prehistoric people trading and travelling through the area from all over Britain for thousands of years.

The Romans built a fort in the centre of the gorge to provide a link in the vital route from their empire to the Northern frontier on Hadrian's Wall. The road they built was the first of many; cattle were driven to market along a network of drovers roads for hundreds of years.  The turnpike roads provided a route for lovers from the 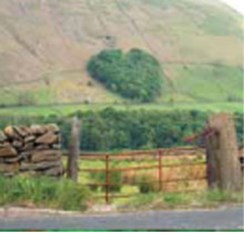 south to elope to Gretna Green across the Scottish border. Now the M6 winds through possibly the most picturesque stretch of motorway in the country.

The railways were vital in the development of Tebay which was once a bustling junction between the North Eastern and the London and North Western railway lines. The A685 between Tebay and Kirkby Stephen now follows the route of the old North Eastern line.  More than 40 years after the closure of Tebay station, railway heritage is still celebrated in St James Church with the fascinating 'Tebay in Steam' exhibition. The church was built to serve the spiritual needs of the railway workers and much of Tebay was originally built to house them.