History and Heritage of Appleby

During the 9th century, Viking settlers arrived in the Eden Valley and probably established the first homestead near Bongate in Appleby (Norse for 'place with apple trees') and at many other places along the Eden and its tributaries. The Normans recognised the advantages of overlooking an important river crossing at Appleby and built the defensive stone keep of Appleby Castle on a high vantage point. The Clifford family took over the castle in the 13th century and held it for the next 400 years.

The colourful spectacle of Appleby Horse Fair has its origins circa 1685. Held in early June every year at Fair Hill this event is a major cultural gathering for travelling people and attracts huge numbers who come to witness horse sales and the tradition of washing horses in the river. 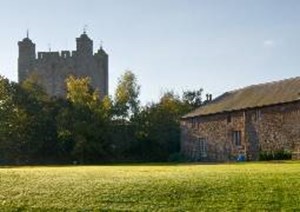 Appleby Castle consists of a 12th-century castle keep which is known as Caesar's Tower, and a mansion house.  These, together with their associated buildings, are set in a courtyard surrounded by curtain walls.

Tours of Appleby Castle are available.  Tickets can be booked online or bought at the Grounds Hut on the Gate.

Appleby Castle was once the home of Lady Anne Clifford who played a major part in shaping Appleby in the 17th century.

Every year, thousands of visitors choose to arrive in Appleby by means of Britain's most spectacular railway - the Settle-Carlisle Railway line. Opened in 1876, as part of the Midland Railway route from London to Scotland, the line includes fourteen tunnels and twenty viaducts, the most famous of which are at Dent Head and Ribblehead.

George Washington's father and two half brothers were educated at Appleby Grammar School. He was to have followed in their footsteps, but in 1743, on reaching the age at which the two older boys had made the long voyage from Virginia, his father died suddenly. George Washington was not to make the Atlantic crossing, nor to acquire the classical education that schools like Appleby excelled at.

Appleby developed early as a market town to sell produce from the surrounding rural area. The two tall crosses at either end of Boroughgate marked the boundary of the market area. High Cross was the cheese market and butter was sold from Low Cross.

Meat and livestock were also sold in the shambles and bulls were baited by dogs before slaughter in the belief that this tenderised the meat.  Bullbaiting ceased in 1812 after one animal broke free and stampeded through the town. The bull tethering ring was last used in 1812 and is no longer in the ground but in a display case in the Tourist Information Centre.